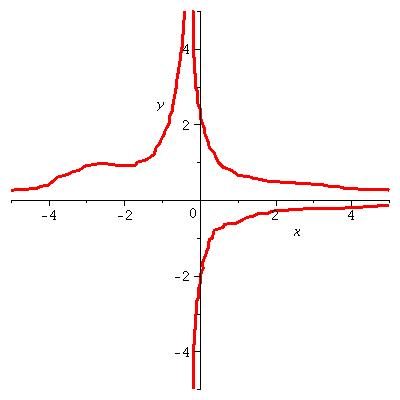 Exact differential equations are interesting and easy to solve. But you wouldn’t know it from the way they’re taught in most textbooks. Many authors stumble through pages of algebra trying to explain the method, leaving students baffled.

Thankfully, there’s an easier way to understand exact differential equations. Years ago, I tried to come up with the simplest possible way of explaining the method. Here’s what I came up with.

The entire method of solving exact differential equations can be boiled down to the diagram below: “Exact ODEs in a Nutshell.”

Before we do anything, we check that our equation is really exact. To do this, we move to the bottom line labeled “test for exactness.” That is, we take the derivative of Fx = M with respect to y (giving us Fxy = My). And we take the derivative of Fy = N with respect to x (which gives us Fyx = Nx). Set these equal to each other. A basic theorem from calculus says that the mixed partial derivatives Fxy and Fyx will be the same for any function F(x,y). If they’re equal, F(x,y) on the top line is guaranteed to exist.

In the end, we’ll have two candidates for F(x,y). Sometimes they’re the same, in which case we’re done. Sometimes they’re different, as one will have a term the other won’t have — a term that got dropped to zero as we differentiated from F(x,y) to either Fx or Fy, since it’s a function of only one of x or y. This is easy to solve: just combine all the terms from both candidates for F(x,y), omitting any duplicate terms. This will be our solution F(x,y) = c.

Try using this method on a few examples here. I think you’ll find it’s much simpler — and easier to remember years later — than the round-about method used in most textbooks.