The Linear Algebra View of Calculus: Taking a Derivative with a Matrix 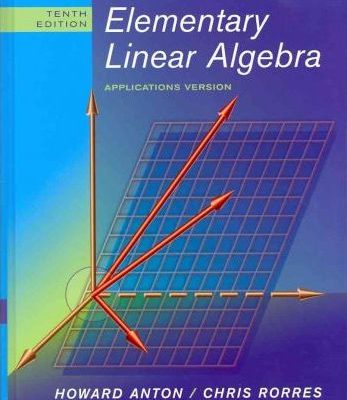 Most people think of linear algebra as a tool for solving systems of linear equations. While it definitely helps with that, the theory of linear algebra goes much deeper, providing powerful insights into many other areas of math.

In this post I’ll explain a powerful and surprising application of linear algebra to another field of mathematics — calculus. I’ll explain how the fundamental calculus operations of differentiation and integration can be understood instead as a linear transformation. This is the “linear algebra” view of basic calculus.

Taking Derivatives as a Linear Transformation
In linear algebra, the concept of a vector space is very general. Anything can be a vector space as long as it follows two rules.

One of the more interesting vector spaces is the set of polynomials of degree less than or equal to n. This is the set of all functions that have the following form:

If we call the set of polynomials , then the set of derivatives of this is , since taking the first derivative will reduce the degree of each polynomial term by 1. Thus, the operation “take the derivative” is just a function that maps . A similar argument shows that “taking the integral” is also a linear transformation in the opposite direction, from .

Once we realize differentiation and integration from calculus is really just a linear transformation, we can describe them using the tools of linear algebra.

Here’s how we do that. To fully describe any linear transformation as a matrix multiplication in linear algebra, we follow three steps.

Finally, we collect each of those resulting images into the columns of a matrix. That is, each time we run an element of the basis through the linear transformation, the output will be a vector (the “image” of the basis element). We then place these vectors into a matrix D, one in each column from left to right. That matrix D will fully represent our linear transformation.

An Example for Third-Degree Polynomials
Here’s an example of how to do this for , the set of all polynomials of at most degree 3. This is the set of all functions of the following form:

where at a0…a3 are constants. When we apply our transformation, “take the derivative of this polynomial,” it will reduce the degree of each term in our polynomial by one. Thus, the transformation D will be a linear mapping from to , which we write as .

To find the matrix representation for our transformation, we follow our three steps above: find a basis for the domain, apply the transformation to each basis element, and compile the resulting images into columns of a matrix.

First we find a basis for . The simplest basis is the following: 1, t, t^2, and t^3. All third-degree polynomials will be some linear combination of these four elements. In vector notation, we say that a basis for is given by:

Applying our transformation to the four basis vectors, we get the following four images under D:

Now that we’ve applied our linear transformation to each of our four basis vectors, we next collect the resulting images into the columns of a matrix. This is the matrix we’re looking for — it fully describes the action of differentiation for any third-degree polynomial in one simple matrix.

Collecting our four image vectors into a matrix, we have:

This matrix gives the linear algebra view of differentiation from calculus. Using it, we can find the derivative of any polynomial of degree three by expressing it as a vector and multiplying by this matrix.

To find its derivative, we simply multiply this vector by our D matrix from above:

which is exactly the first derivative of our polynomial function!

This is a powerful tool. By recognizing that differentiation is just a linear transformation — as is integration, which follows a similar argument that I’ll leave as an exercise — we can see it’s really just a rule that linearly maps functions in to functions in .

In fact, all m x n matrices can be understood in this way. That is, an m x n matrix is just a linear mapping that sends vectors in into . In the case of the example above, we have a 3 x 4 matrix that sends polynomials in (such as ax^3 + bx^2 + cx +d, which has four elements) into the space of first derivatives in (in this case, 3ax^2 + 2bx +c, which has three elements).

For more on linear transformations, here’s a useful lecture from MIT’s Gilbert Strang.